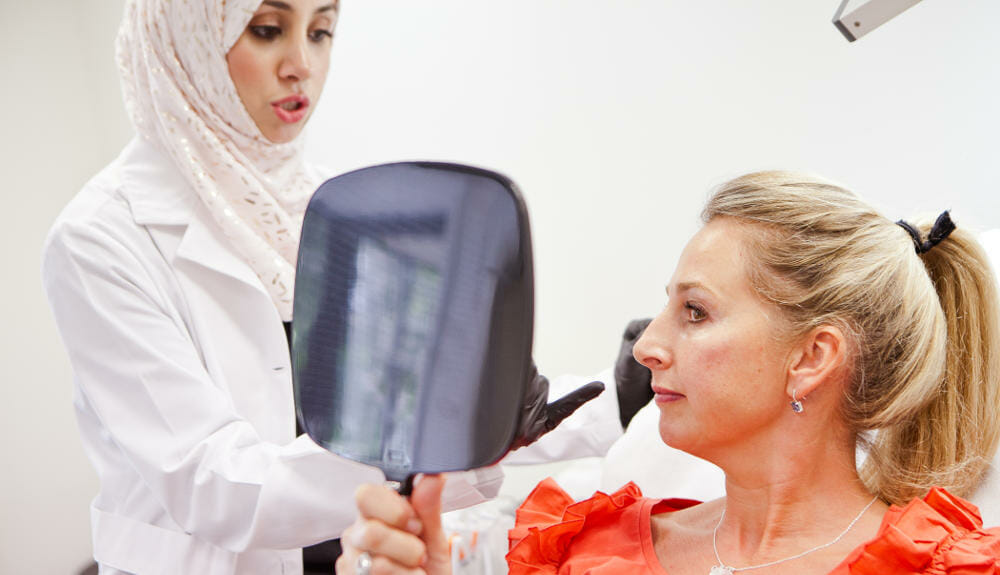 Liquid rhinoplasty, or a liquid nose job is an amazing alternative to a traditional, surgical rhinoplasty for the right patient. How do you know if that right patient is you? It all boils down to what it is you want to change about your nose, how ready you are to commit to the changes created by a nose job and what your schedule is like.

There are a few major differences between a liquid nose reshaping, or non-surgical rhinoplasty, and a surgical nose job. Let’s start by explaining what happens during each procedure.

During a liquid rhinoplasty, your doctor will use injectable dermal fillers which contain hyaluronic acid, to change the shape and structure of your nose. Hyaluronic acid is a substance naturally produced by your body, which is soft and malleable and comes in different densities. The filler is also completely reversible, which can be good if you end up changing your mind or decide that you don’t like your results. The dermal fillers contain Lidocaine, a local anaesthetic, to help numb the area while simultaneously administering the treatment. This has been proven to improve clients’ experiences by reducing any possible discomfort within a matter of minutes. The nose can then be treated with little to no bruising as a rounded tip blunt cannula is used to administer the filler, pushing nerve endings and vessels out of the way so bruising and swelling is minimised. The downtime is minimal with most people go back to work straight after the procedure.

During a traditional rhinoplasty, it’s common for a surgeon to administer general anaesthesia which means you’ll be completely unconscious during the procedure. After surgery, you will need to stay in hospital for one night and wear a splint over your nose for 7-10 days. There will be bruising around the nose and eyes which should subside in around two weeks post-surgery and swelling can take up to six weeks to recover. It is recommended that you refrain from working for at least two weeks after your surgery and avoid strenuous exercise for at least six weeks, therefore there is far greater downtime with surgical rhinoplasty vs liquid rhinoplasty.

The exact changes you would like made to your nose play a big role in determining whether a liquid or traditional rhinoplasty is the right option for you. A non-surgical rhinoplasty is the more limited of the two procedures, as it can only correct a small number of issues with the nose. If you have a divot or depression in the nose, or if you want to add to the tip or turn it up, a liquid nose job can be a great option for you. The treatment can also help to straighten a crooked nose or minimise the appearance of a hump or bump on the nose. If you think your nose is too large however, non-surgical rhinoplasty cannot, of course, replace a traditional rhinoplasty, especially where there is a desire to dramatically reduce the size of the nose. Non-surgical nose reshaping is mainly suitable for those who need refinement of their nose shape – a large nose cannot be made smaller with this treatment. However, it is a great way to correct some smaller issues with great results.

A liquid nose job treatment usually takes less than half an hour. You also don’t have to take much time off from work. Many people can go back to the office the day after their injections although it is important that you treat the nose with care during the first few days after the procedure. Although a liquid nose job doesn’t require much time off, the trade-off is that it also doesn’t last as long as a surgical procedure. The results from a liquid rhinoplasty are temporary and usually wear off after 12 months. Meanwhile, the results from a traditional nose job are meant to be permanent. In contrast, a surgical rhinoplasty requires a much bigger chunk of your time, and you can expect the surgery to take a couple of hours. After that, you’ll need to take a few weeks off from work, and any sort of vigorous physical activity should be postponed for 6+ weeks afterwards.

In summary there is no longer a need to go under the knife to make adjustments to the nose. Dermal fillers can be used in a variety of ways from creating a smoother profile, reshaping and contouring the nose, to turning up the nose tip to achieve results that were previously only ever possible with surgery.

To find out more about non-surgical nose reshaping from MD Aesthetic, book your consultation here.

You can find out more about which cookies we are using or switch them off in settings.

This website uses cookies so that we can provide you with the best user experience possible. Cookie information is stored in your browser and performs functions such as recognising you when you return to our website and helping our team to understand which sections of the website you find most interesting and useful.

This website uses Google Analytics to collect anonymous information such as the number of visitors to the site, and the most popular pages.